The long-awaited ceremonial event was filled with the smell of local pastries, a cheering crowd, lots of reminiscing and plenty of questions.

Why it matters: Breaking ground on Eastland is the first milestone for a project that still has a long way to go, but it’s a sign that progress and opportunities for economic growth are taking shape.

What they’re saying: Tracy Dodson, assistant city manager and economic development director, kicked off the groundbreaking with an anecdote about working for the city three different times. Every single time, she worked on Eastland. Here are five things to know about the project.

That’s the project’s name, and it includes a new logo. Copyright issues prevented the project from using the original Eastland Mall sun logo. 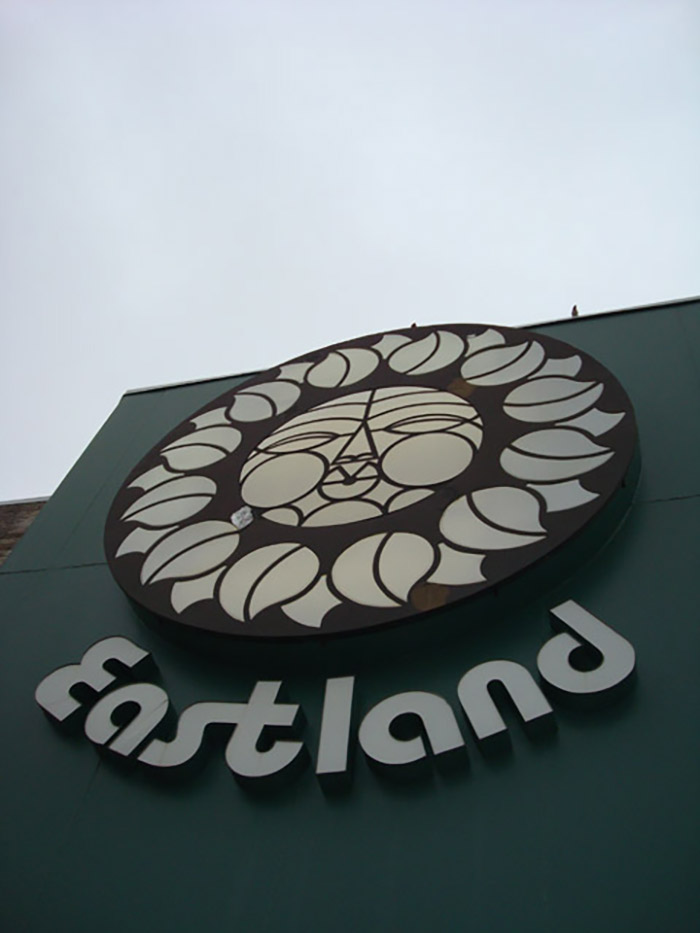 Signage at Eastland Mall, which closed in 2010. Photo courtesy of Pat Richardson

That’s the total number of phases planned for the project. Future phases will include another 145,000 square feet of office and retail space. A grocery store and health care component are also part of the plan.

The project broke ground without Tepper Sports and Entertainment, and as we originally reported, TSE has no plans for a Charlotte FC presence at Eastland at this time.

Context: TSE was originally proposed as an anchor tenant for the project, first with the team’s headquarters and practice facility planned for Eastland, which was later replaced with plans for the team’s academy headquarters there. Both were intended to occupy 20 acres of the 80-acre site the city had earmarked for a sports or recreation component.

The big picture: Tim Sittema, managing partner at the project’s master developer Crosland Southeast, said the development “is not dependent on [TSE’s] participation.” This statement was met with cheers and applause from the crowd.

What’s next: Sittema said there are three prospective parties interested in the site, but he declined to share who they are or a timeline for selection.

5. Don’t expect the Central Flea Market (CFM) to go on the 20-acre side

Hector Vaca, a CFM organizer and east side resident, held a sign throughout the groundbreaking reading “Let CFM COME HOME!”

Context: The development also displaced a skate park that operated on the site, as well as the local flea market of more than 200 vendors. Flea market vendors were left without a space to operate after their lease expired, as Axios’ Laura Barrero reported.

Yes, but: The 20-acre side seems like a logical alternative, because plans for it are up in the air and the vendors need a space to operate. That piece of the project, however, is intended for sports and recreation. When I asked Sittema about this, he compared the mixed-use project to a “complex recipe,” saying “you can’t just throw anything into the pot and cook something that’s going to be great to eat.” Getting Started in Real Estate Investing

More than a Mortgage: The DHL Experience